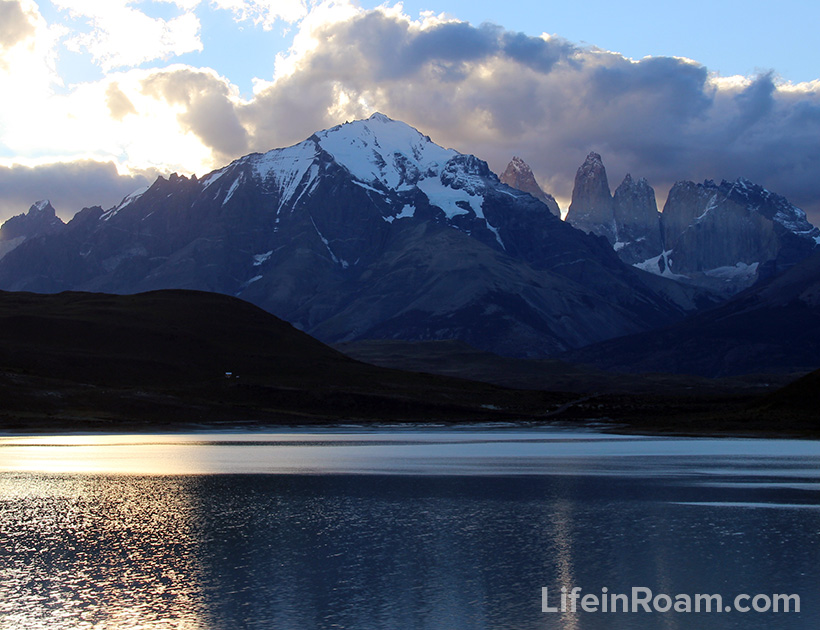 Just like Glacier Grey, hiking to the base of the towers in Torres del Paine National Park is easily done as a day trip. In fact it is easier to do this as a day trip than it is to do Glacier Grey. For more information about busses and cost of entering the park, check out this blog post.

The towers of Torres del Paine are the namesake of the national park. The formation of the towers happened 12 million years ago. The granite lava pushed up and through black sedimentary rock to then cool into the form of the towers. The sedimentary rock eroded away, leaving behind only the hard granite towers. In 1880, Lady Florence Dixie, a Scottish writer and feminist, called the towers Cleopatra’s Needles. Now they are just referred to as the Towers.

After arriving at Laguna Amarga with the bus from Puerto Natales, there are shuttles to Hotel Torres waiting for you next to where the big busses park. I remember the trip being free to the Hotel, but costing something like $5 to return at the end of the day. After the shuttle drops you off, you walk in the same direction the bus was driving for about 20 minutes. It is a dirt road and eventually you’ll arrive at the trailhead.

This is the last you’ll see of the towers until you reach the final bit of the trail.

The trail is extremely easy to follow and will be quite popular. It is a lot of uphill climbing, but after Cerro Guanaco we didn’t have a problem with it. Basically that hike prepared us for all of Patagonia. Given the relative ease for this hike, we had a joyous time just chatting it up with our fellow hikers.

We met a lovely old Canadian couple who lost all their luggage for a few days so had to rebook all their accommodations on the trail. They were now doing the “O” circuit, which not only includes the “W” trail, but also the backside of the mountains in the park. The steepest/toughest trail in the park is on this section of park. Which made them pretty much the most inspiring people we met on the trail that day.

We also met our friends whom I had been calling “Utah” for the last three days. On our first day in the park we met some fellow Americans while in line for buying tickets into the park who looked particularly miscerned (miserable and concerned). They thought they would be able to buy their park tickets with a credit card, but of course credit cards are a far and advanced technology for this far south in the world. They came up to us and asked to borrow money with the promise of paying us back as soon as they had internet. We were quite skeptical, being the hardened scandal-wary travelers we are, but they had the most puppy dog eyed faces you’d ever seen. Thus we lent them cash and exchanged emails and paypal information.

The next day was pretty stormy though, so I was worried about them camping on the “W” trail. When we saw them on the last day though, they looked pretty hagrid (yes, I know it’s misspelled). They were exhausted and really forcing themselves to do the hike to the Towers. I give them a roll of cookies and I thought the girl was going to hug me.

Which would of been totally fine, if she wanted to.

After doing an initial ascent, you have a lot of more leisurely hiking through forests and shade that is not very steep. Then you approach the last part of the hike which is more steep, kind of scramble-like, which starts in trees and then has some completely exposed rock-field. 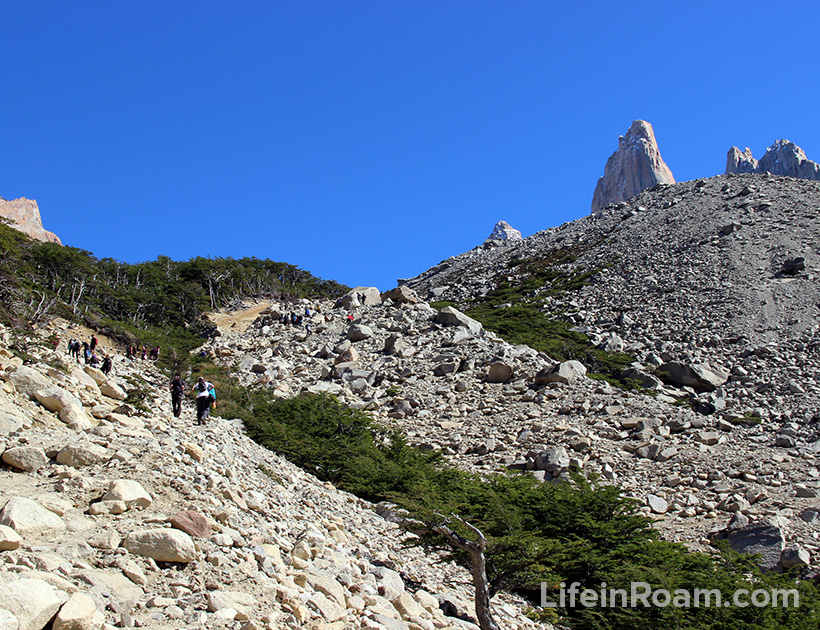 And here you start seeing pieces of the towers again. This part of the hike can be sort of hard to tell where the trail is. It is important to stay on the trail though because it limits erosion of this pristine and popular trail. Be careful of rocks sliding/slipping.

Once at the top, we enjoyed lunch with an incredible view. While I think the view from El Chalten was much nicer, and the hike also more enjoyable since you are seeing Fitz Roy the whole time your hiking, this lunch was more enjoyable because for us there was no wind at the laguna. 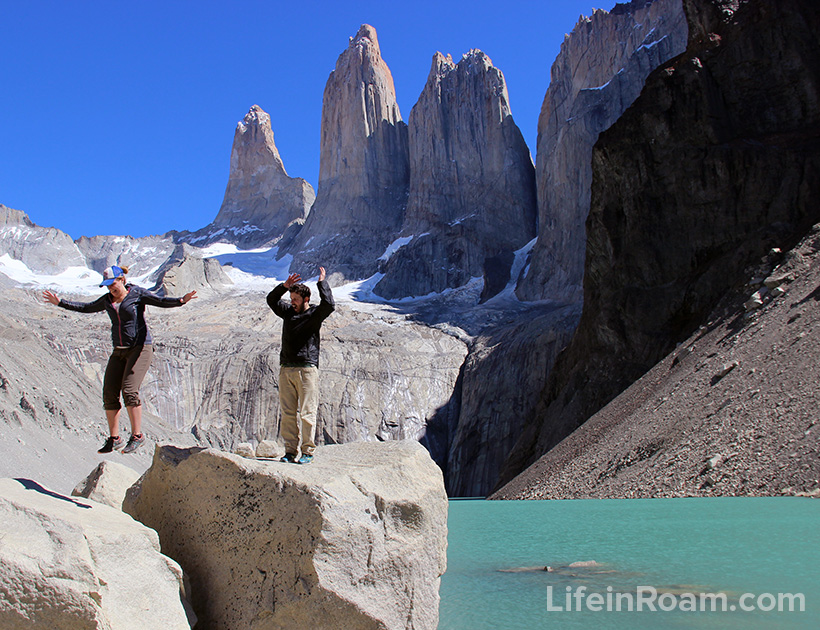 On the way back down I noticed a tree that I hadn’t noticed before. This tree, erm, roots? had a bunch of little rocks on it that people had placed. This is a tradition that I learned about later in our trip. People will pick up rocks at the beginning of their trip and then carry them throughout their journey to leave at the top. Sometimes it is rocks but also sometimes they will leave water bottles or little snacks. You see a lot of small vigils of the Virgin Mary in South America and a lot of them have water in coke bottles or other things. These are meant to be used by people who need them while on their journeys. 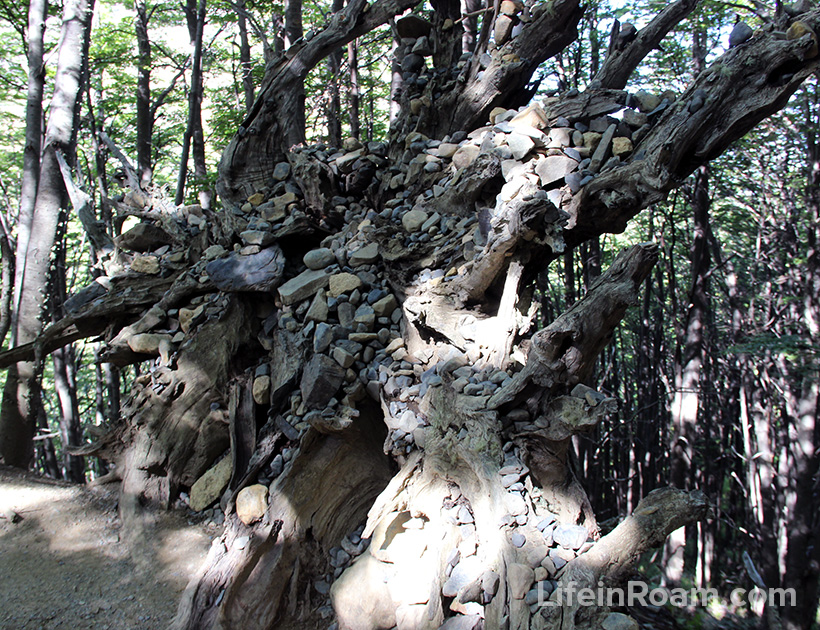 And we say our Canadian friends again! They happily took this photo for us.

Finishing the hike is the same as starting it. You walk back to Hotel Paine and take a shuttle back to the main entrance of the park to then get your big bus back to Puerto Natales. Taylor left her phone on this intermediate shuttle and it was impossible to get it back. There is no phone service in the park, so we couldn’t call the bus company or the hotel. Also, no one really wants to take your problem on to help you, which makes it very very difficult.